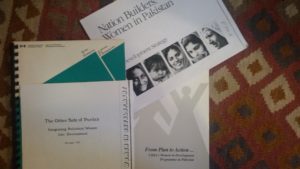 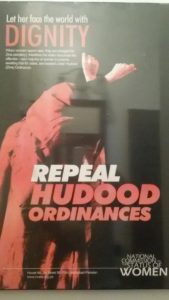 Poster by the Pakistan National Commission for the Status of Women advocating for the repeal of the Hudood Ordinances which instituted Islamic Sharia law on adultery (Zina) making sex outside marriage a criminal offence and rape a private offence. A women who had been raped had to prove her innocence or be accused of adultery.

Canada, through CIDA (now Global Affairs Canada), was the first country to establish an innovative gender fund to provide small grants to Pakistani women’s organizations in 1989. Hundreds of women’s organizations were funded over two decades which helped advance women’s rights even as violent extremism was on the rise. From Canada’s first ‘Women in Development (WID)’ strategy of the mid 1980s, a bold step for a foreign donor at the time in a country like Pakistan, the gender funds evolved from supporting social welfare projects to direct funding for women’s human rights and women’s economic empowerment.  The successful women’s economic empowerment programming that Canada continues supporting today began as a niche area in the mid 1990s under CIDA’s fifth gender fund: The Program for the Advancement of Gender Equality or PAGE. It’s predecessor, the 1996 Women’s Development Project Fund was a ground-breaking initiative, a multi million- dollar fund for women’s organizations, the first of its kind in Pakistan and perhaps globally. Later a similar fund was developed by UK DFID and in 2010 USAID launched an even larger ($40 million) Gender Equity Program  implemented by one of CIDA’s key partners on gender equality in the 1990s, The Aurat Foundation. 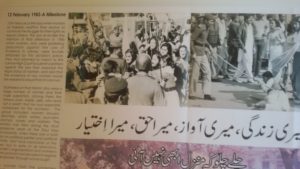 Poster commemorating the women’s protest of 12 February 1983 in Lahore against “Law of Evidence” that upheld the testimony of a male as equal to that of two females in a court of law.

CIDA’s first mission on WID took place in Pakistan a year after the historic women’s protest on against the Sharia law of evidence instituted by President, General Zia-ul-Haq. That protest on February 12, 1983, saw Pakistani women teargassed, beaten, arrested and hauled off to jail.  Their photos flooded the media.  The Law of Evidence reduced the legal status of women by stating that the evidence of two women would be needed to equal that of one man. The resistance to the Hudood ordinances (implementation of aspects of Sharia law) and the Islamization of laws affecting women in Pakistan launched a new stage in the struggle for women’s rights – a social movement which continues today.  The Women’s Action Forum (WAF) was born out of protest movements against introducing legislative measures and laws that were restricting women’s rights. CIDA’s WID advisors at the time were witnessing an historical moment, one which drastically changed Pakistan and the course of women’s rights. It was the beginning of the groundswell of support for Islamic extremism in Pakistan that continues today. 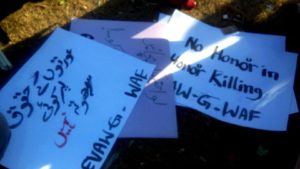 Handwritten placards against honor killing from the recent WAF protests in 2016.

After 9/11, Canada increased funding for women’s rights organizations through the PAGE fund approved in 2002.  This fund was one of the first to support efforts to combat honor crimes, legal aid and awareness, and the creation of thousands of centers for grassroot organizations on gender and social development (latter through the Aurat Foundation). Through localized funds Canada was the first aid donor to provide support to honor crimes victims, notably Mukhtar Mai in 2002. She was gang raped on the orders of a tribal council (Panchayat) as punishment for alleged indiscretions of her brother in Muzaffargarh district of Southern Punjab.  Through the initial efforts of Pakistan’s internationally recognized human rights lawyer, Hina Jalani together with many other Pakistani women’s rights activists, Mukhtar Mai was awarded compensation by the Government which she used to start up two schools for girls and a women’s shelter in her district.  All of these projects have been funded over the years by Canada through localized funds. CIDA is the only aid donor acknowledged and thanked in Mai’s memoir, “In the Name of Honor” (2006). The Memoir recounts the visit of the Canadian High Commissioner to her village in 2005 and quotes her speech on International Women’s Day in support of Mai and women’s rights. This year both Mukhtar Mai and Hina Jilani were part of a panel for Canada’s ‘Women’s Empowerment Forum 2017’ on Women’s Rights in Pakistan convened by the Canadian High Commission in Islamabad. 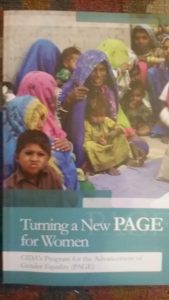 Cover of CIDA’s Publication documenting the experience of the fifth Gender Equality Fund from 2002-2010, the Program for the Advancement of Gender Equality (PAGE). “It serves as a record of the PAGE experience” and identifies “successful approaches, weaknesses and lessons from PAGE strategies”.

The Women’s fund was an early supporter of the now well known lawyer, Zia Awan and his organization, Madadgaar, in Karachi for legal assistance for female victims of violence and honor crimes.  Many more stories exist of small steps taken that have made a difference. The gender funds helped the work of Pakistan women’s organizations to move forward policies and laws for women’s protection that are now in place. The Women’s protection bills were passed in 2011 and this year, Pakistan’s Parliament finally passed the long- awaited bill against honor crimes.  The challenge today is the implementation of these laws and policies at the grassroots level.

During Malala’s visit in April of this year, she challenged Canadians to continue to strive for justice and for equality for opportunities for girls and women around the world.  In Pakistan, this challenge is not a small one in these uncertain times when violence against women and girls is possibly at its highest ever and safety and security of human rights activists remains a concern.  Knowledge derived from Canada’s history of gender funds in Pakistan captured in the CIDA publication, ‘Turning a New PAGE for Women’ are particularly relevant today – the importance of localization and supporting engagement with communities through grassroots women’s organizations. Yet grassroots activists and those with a voice against violent Islamic extremism like Malala continue to be threatened and attacked and often accused of being promoters of a western agenda. When Malala was shot by the Taliban in October 2012, I was working in Pakistan as Canada’s Head of Cooperation. It was yet another horrifying warning about how far the Taliban would go to instill fear in the population by using terror of girls and women as a formidable tactic.

The challenge for foreign aid programs today is how to find the grassroots community based groups fighting in their own ways to provide opportunities for women and girls, for the right of girls to go to school, to marry as an adult, to stop honor crimes against women and girls and to fight in general for all human rights. The role of foreign aid should remain one of support to those groups who are protagonists of their own development and destiny. 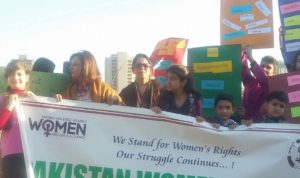 2016 WAF protests against Honor Killing and violence against women. The Honor Killing legislation was finally unanimously passed into law in October 2016.

Many years have passed since 1983. This year on February 12th, Pakistan Women’s Day, a group of women gathered at an event organized by some of the founders of the Women’s Action Forum in Islamabad, to commemorate the women’s protest in Lahore in 1983 against the Law of Evidence that ignited the Pakistani women’s movement.  The opening speech by Nageen Hyat of Nomad Art Gallery said, “A journey spanning 30 years of resistance, demand, protest and challenges, we the progressives must continue to create a more conducive, just and egalitarian and peaceful environment for all in Pakistan. We cannot afford to give up. And must continue to strive for peace in the region.” For Canada, to continue to accompany these women and especially those working at the grassroots in their ongoing struggle builds on Canada’s aid legacy in Pakistan on gender equality funding and provides an answer to Malala’s challenge to Canada.

Rhonda Gossen is a consultant with the UNDP Crisis Response Unit and a former career CIDA professional and Canadian diplomat posted in several countries in Asia and Africa. Between 2010-2013, she was Head of Cooperation for Canada in Pakistan and in 2009 assigned for CIDA at the Provincial Reconstruction Team in Kandahar, Afghanistan. She will be a visiting fellow in residence in September 2017 jointly with Green College and the Liu Institute for Global Issues at UBC.