The “Creative Crusade”: Settler Colonial Antinomies and Books for Development in the Age of Three Worlds

In November of this year, Jody Mason gave a lecture for the Canadian Literature Centre at the University of Alberta with this same title. What follows is a brief adaptation of one of the central points of the talk about the history of development aid.

We might probe the complex and shifting settler colonial identifications of the decades between 1950 and the end of the 1970s period by looking at the history of development assistance, which brought books—key elements of the cultures of new left and sovereigntist nationalisms—together with “development” in actions that framed Canada as a successful model of modernization and decolonization. An important case for such a study is the Overseas Book Centre / Centre du livre pour outre-mer (OBC / CLO), a non-governmental book development program established in Toronto in 1959 by liberal internationalist and adult educator James Robbins (“Roby”) Kidd, Harry Campbell (then Chief Librarian for the Toronto Public Library), Canadian Association for Adult Education member Marion McFarland, and Kurt Swinton (then President of Encyclopedia Britannica Canada).

The OBC had Canadian precedents in non-governmental undertakings like the Canadian Council for Reconstruction Through UNESCO and other book-donation campaigns that responded in the wake of the Second World War to the call of reconstruction. However, in using books as instruments to support international education and what was coming to be called “development” the OBC would not, like the CCRU, aim at Europe; they set their sights instead on the nations of what was coming to be known as the “developing world.”[i] The OBC was committed to the idea that wealthy nations like Canada could, as one organizational history puts it, “help education in the Third World through presentation of books.” The OBC flagship program, “Books for Developing Countries,” had, according to Harry Campbell, a second purpose: to provide a use for surplus books from Toronto libraries and Britannica that would otherwise have been “burned or shredded” (though the OBC also received donated books from publishers, schools, colleges, professional groups, and individuals). Initially the OBC operated from space supplied by Kurt Swinton in an Encyclopedia Britannica warehouse in Toronto where volunteers collected and packed books for shipment; today, the NGO is known as the Canadian Organization for Development Through Education, and it is located in Ottawa.[ii]

As scholars such as Gilbert Rist have demonstrated, the development concept of the postwar years was deeply embedded in older histories of colonialism, though the terminology shifted.[iii] This genesis is important to the OBC / CLO, but here the specific context of settler colonialism must also be accounted for. In speeches such as Roby Kidd’s “I Am What a Librarian Made Me” (1961) or in texts such as Kidd’s An International Development Plan for Canada (1961), Kidd emphasizes that Canada was poised to lead the new “creative crusade.” The nation’s technological and scientific capacities are key to Kidd’s argument, but more important is his attention to the nation’s political status. Canada, he argues, is not “perceived as a threat”:

Other people can accept aid from us without feeling demeaned or becoming fearful that this is the beginning of a new imperialism. Moreover, we ourselves have recently passed out of colonialism and are even now going through rapid industrialization. We seem to be nearer in our own development to what others want to do.[iv]

Kidd’s framing of Canada as having “recently passed out of colonialism” rests on a denial of the internal colonization that structured 1960s Canada. At the same time, his view acknowledges the possibility of continuity between the old imperialism and the new development, while explicitly avoiding Canadian implication in that continuity: this could not be the new colonialism because a former colony was one of its key players. In Kidd’s version of this history, a former colony had caught up to its more “developed” counterparts. It had accomplished what Rist calls the “impossible” feat at the heart of the development paradigm, which holds to both an evolutionist idea of history and an asymptotic representation of growth: “Since time measured by the calendar passes at the same rate for everyone, it is by definition impossible for countries at the bottom to ‘catch up’ those at the top; the gap can only go on widening.” Kidd’s example of Canada seems to affirm this myth rather than disprove it; however, this is more revealing of the particular situation of the settler colony than of any observable truth about development.[v]

A second set of contradictions underwrote the work of the OBC through the 1960s and 70s. While Kidd was using his roles in the new international institutions––he was conference president of the 1960 UNESCO World Conference on Adult Education and chair of UNESCO’s Experimental World Literacy Programme from 1967-1973, for instance––to call for locally relevant and locally produced literacy materials, he was at the same time promoting the book donation model of the OBC. This is despite the fact that an increasing body of research produced at UNESCO through the 1970s was demonstrating that this model was irrelevant at best and neocolonial at worst: studies such as Ronald Barker and Richard Escarpit’s The Book Hunger (1973), for instance, offer a frank assessment of the fact that book donations from the world’s book “producing” nations could not solve acute book shortages in Africa because the greatest need was for books in languages not published in the producing nations; Philip Altbach and Eva Maria Rathgeber’s Publishing in the Third World (1980) critiques the tendency of book donation schemes to undermine fragile local publishing industries by flooding markets with subsidized books.[vi] These arguments are particularly germane to the work of the OBC: between 1960 and 1975, the OBC shipped nearly twenty million books to fifty countries, and almost four hundred tonnes of books (and equipment) were shipped overseas in 1976-77 alone.[vii]

Jody Mason is a member of the Department of English Language and Literature, where she researches the history of literacy and citizenship.

[i] Canada, “Canadian Council for Reconstruction Through UNESCO: Submission to Royal Commission on National Development in the Arts, Letters and Sciences, 1949-1951,” 1-3, Library and Archives Canada, 27 Jan. 2001, collectionscanada.ca/massey/h5-318-e.html. Accessed 10 Feb. 2020.

[ii] Tony Richards, “From Giving to Helping: The Evolution of a Development Agency,” Logos 4,

Teager. W.A. Teager, “Cultural and Humanitarian Activities Leading to an International Role and

END_OF_DOCUMENT_TOKEN_TO_BE_REPLACED

OCCAH Internship: Study of the Flow of Refugees from the Middle East and Africa

The Canadian Research Institute on Humanitarian Crisis and Aid at the University of Quebec at Montreal is searching for a student intern to participate with a study on Middle Eastern and African refugee movement.  This research internship could then be used as the subject of a Master’s thesis or PhD dissertation.

END_OF_DOCUMENT_TOKEN_TO_BE_REPLACED 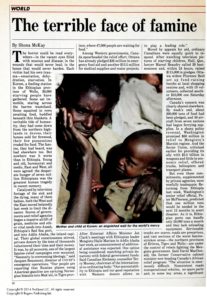 Ethiopia has recently resurfaced in international headlines, in light of yet another looming apocalyptic scale famine.  It is being widely reported that Ethiopia is facing its worst drought in 50 years. [1] A result of three failed rainy seasons, coupled with an El Nino effect warming the Pacific Ocean and affecting global weather patterns.[2] Changes in weather patterns that have resulted in punishing heat waves and drought throughout the horn of Africa region, and in Ethiopia becoming one of the worst afflicted countries.[3] With just weeks remaining before the start of the main cropping season in the country, the United Nations Food and Agriculture Organization (FAO) is calling for urgent funding to assist farmers in sowing their fields to abate drought stricken areas from falling deeper into hunger and food insecurity.[4] With a future saddled by the “uncertainty of what nature has called down upon it”[5], Ethiopia, as CBC’s Margaret Evans among many others have characterized it, is once again “on the edge.”[6]
END_OF_DOCUMENT_TOKEN_TO_BE_REPLACED