This year is Canada’s 150th anniversary, but it is also the 55th year that Cuso International has been sending volunteers abroad. Originally founded as Canadian University Services Overseas (CUSO), Cuso International has undergone a few name changes over the course of its history. It has been involved in international development since its founding in 1961, but when it dropped the acronym and rebranded as CUSO in 1981 it marked the beginning of a new direction for the organization as it broadened its mandate to include social justice. Over the next decade and a half, CUSO began working on many issues that continue to be of great importance to the world today, issues like women’s rights, education, and environmental sustainability. A few other name changes also took place to get from CUSO to the current name, Cuso international. To avoid any confusion with names, I will refer to the organization past and present by the current name: Cuso International.

A record of Cuso International’s founding and early work can be found in the book Canada’s Global Villagers: CUSO in Development, 1961-1986 by Ruth Compton Brouwer. Published in 2013, this book covers Cuso International’s past in far greater detail than I could here. Though some of my research overlapped with the end of Brouwer’s book, I was able to explore a few years after its end. Most of Cuso International’s history lies hidden away its own publications from many years ago and in the memories of its thousands of alumni and I was fortunate enough to read the very pages that contain that history and predate me, and consult a couple of alumni who lived through this work as well. 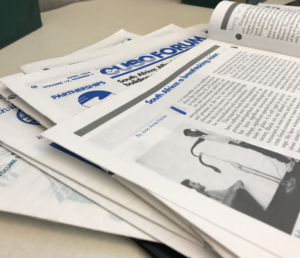 Some of the copies of the CUSO Forum used for this research – held at CUSO International’s Ottawa office.

Cuso International was involved in a number of initiatives in the 1980s and 1990s, but perhaps the most internationally well-known was the anti-apartheid movement in South Africa. In 1976, Cuso International officially adopted a policy of support for African liberation movements recognized by the Organization for African Unity and after 1980, Cuso international began transitioning this policy to an anti-apartheid policy. Through reading the CUSO Forum publications from the 1980s and 1990s, I was able to track the progress of Cuso International’s anti-apartheid work and its tenacity in supporting the movement from its beginnings to the thunderous cheers at the first mixed elections in South Africa in 1994 and beyond. Reading through these publications was truly fascinating. I was able to see the story unfold as it happened from one issue to the next.

As a political science student, in addition to being a history student, one particularly interesting part of Cuso  International’s work in South Africa was its involvement in the 1994 election. Winning the right to vote was half the battle many groups opposed the enfranchisement of the black population and did not want them voting in the upcoming election. This prompted Cuso International to begin a program it called “education for democracy.” It sought to educate those who were previously disenfranchised on the voting process and engage them in democratic participation. This was not just the simple information of where to vote but about the transition to the new democracy and the importance of voting. The right of every citizen to vote is fundamental in a democracy and came as a shock that something I had taken for granted my whole life was being opposed just a few years before I was born. This kind of education was important back then, but is still important today.

All of the work that Cuso International has done over the years is made possible thanks to its wonderful volunteers who volunteer abroad. Throughout my research I came across several people who volunteered with Cuso International and returned to make a contribution to Canada. A few volunteers later published books. Dr. Murray Dickson and his wife Dr. Gerri Dickson volunteered in Nigeria and Papua New Guinea in the 1970s and in Mozambique from 1981 to 1983. In 1983, Dickson’s book Where There Is No Dentist was first published. It is an accessible oral health guide for those without access to sophisticated equipment. This book is still in print today, with an updated 14th edition published in 2012! Betty Kilgour volunteered with Cuso International in Tanzania in 1976 and published an account of her time there in So This is Africa in 1987. Jennifer Mitton volunteered in Nigeria from 1986-1986 and, inspired by her experience, wrote the novel Fadimatu, published in 1992. There is even a Canadian Ambassador among Cuso  International’s alumni: Allan Culham was the Canadian Ambassador to Guatemala from 1997-2002. 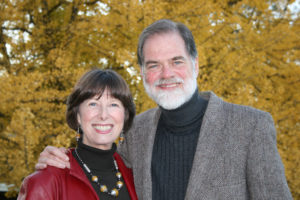 These are just some of the Canadians I learned about who have volunteered with Cuso International. What was particularly exciting regarding this project was the opportunity to talk with someone who had lived through what I was reading about. Hulene and Michael were kind enough to speak with me and tell me about their experience with CUSO  International. The two of them were volunteers from 1983-1985 in Botswana, back when Cuso International was actively supporting the African National Congress (ANC) in exile from South Africa. After that, they continued to work for some years after with another international development agency and Hulene worked as a director for the Anglican Church’s international development program. 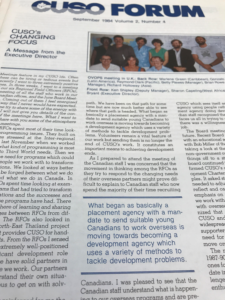 Their own commitments to social justice work drew them to Cuso International and the work it was doing. Their continued interest and contribution to social justice work was truly admirable. Besides having fascinating stories to tell, Hulene and Michael told me a lot about Cuso International during their time in Africa. In those years, Cuso  International was focusing on developing relationships with countries for years to come. Volunteers were there as partners to help foster sustainable development, no longer just professionals working a job for the length of their contract. This was hinted at and discussed in a few of Cuso International’s publications from the early 1980s, but actually hearing it from someone who volunteered at the time was a way of bringing history to life.

Even in the few years Hulene and Michael were with Cuso International, the organization was changing, and through all of Cuso International’s records, I was able to follow that change. Beginning in the 1980s, this twenty year period saw growing work on a number of initiatives that carried on to this day: things like environmental stewardship, women’s rights and support, and food sustainability. It was truly fascinating to track Cuso International’s history and see how its work has led it to where it is today, working on issues that are still so important and, if Hulene and Michael are any indication, still working with good people wanting to do good work.