Our Advisory Group member, Professor Dominique Marshall, has recently notified us that with the assistance of Dr Sarah Glassford, historian of the Canadian Red Cross, selected materials from the Canadian Red Cross archives have now been deposited in the Archives and Special Collections of Carleton University’s MacOdrum Library (Ottawa, Ontario, Canada).

END_OF_DOCUMENT_TOKEN_TO_BE_REPLACED 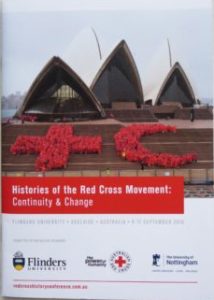